For my primary desktop is KDE which is running the Plasma Desktop plasmoids are a powerful option to add helper widgets to this desktop. Looking for a small, space efficient and simple tool to show cpu usage, memory usage etc. there was none I liked on kde-apps.

The CPU and System Viewer plasmoid provides a simple and rather minimalistic view onto the current CPU usage of your system and can be added to the panel. If wanted, CPU, memory and swap usage are shown in a graph, too. Also, a popup gives more advanced information about the current state of the system.

This plasmoid is written in python and is derived from the Simple CPU Meter plasmoid. Also, ideas from the System Load Viewer plasmoid shipped with KDE SC were used. 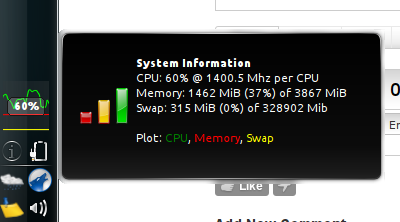 And hence my first foray into KDE Plasma hacking commences.